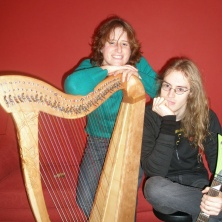 See all the offers of Chiara Pedrazzetti

Your event will be more interesting and nicer with our live music! We can adapt ourselves well to the circumnstances and we garantee the maximum level of performance.

Review:
"Labirinto is a wonderful duo that surprises and delights the audience with their unusual combination of sound and genre. It is a treat to hear two such gifted musicians work together and bring us something completely new."

Sound System: We have our own sound system

Setlist
Mix metal, jazz, Irish, classic, blues ecc.
Biography
LABIRINTO was formed in 2009 by Chiara Pedrazzetti and Sean Lanigan. Chiara was asked to play a concert in Tuscany (Italy) and she decided to make the recital crazier and more interesting with an unusual combination of Irish harp and electric guitar!

Exploring and mixing her skills (classical and Irish music) with those of Sean (metal and blues), they formed a unique duo combining these two beautiful instruments, showing that the harp can rock and the guitar can roll (haha)! The resulting combination worked very well so they decided to continue as a duo.

Labirinto has since been asked to play at prestigious festivals in Switzerland, Ireland, England, Italy, USA, Canada, Russia, Portugal and Brazil. LABIRINTO was interviewed and gave a live performance on Irish national radio RTE on Pat Kenny’s and Marty Whelan’s programmes. In February 2010 they recorded their first CD, titled CIDICIAMO.