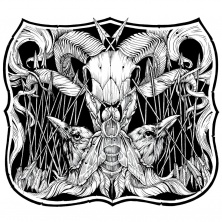 See all the offers of Edmond

Slowly but constantly, the Band has now made its name on the Swiss metal stage and shared the stage with some well known Bands such as: Arch Enemy, Darkane or God Dethroned.

To perform, we need: We need space for 5 people and a power supply.
We bring all the back line (drum + cabinet)

Biography
Attack Vertical was founded in 1999 and has kept making its music evolve ever since. Diferent infuences have found their way into the modern Death Metal they play today.
The band recorded its third album, "This Glorious World", in 2011, through which Attack Vertical was able to show a darker and more energetic side of its music.
Slowly but constantly, the band has now made name for itself on the Swiss metal stage and has shared the stage with a number of well-known bands, such as Arch Enemy, Darkane, God Dethroned, Hatesphere or DevilDriver.
In 2015, Attack Vertical releases its fourth album, "The Great Waste", with Tenacity Music as a label. This partnership allows them to have a European outreach as well as promotion in a number of countries.
In line with the previous album, "The Great Waste" contains heavier and more intense compositions, and therefore sets the stage for yet another musical turn.