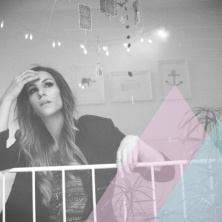 See all the offers of Charlie

Charlie Roe is a swiss singer and songwriter.
Charlie Roe releases her EP entitled "Pomegrenades Attack" in late September 2013, offering 5-piece indie rock and pop music, all inspired by a british sound. She is currently working with the band “Charlie Roe and The Washing Machines” for the live promotion.

Setlist
- Mr. Dead
- Sonny
- People Juice
- Ukulele Song
- So There You Are
- No Better Sound
- Hello
- Like A Kid
- Dalila
- Give It Up
- acoustic and electric covers
Biography
‘Charlie Roe’ is a Swiss- Italian singer and songwriter, inspired by the sound of British pop and rock. From 2013 to 2016 she performed with a live band project named "Charlie Roe & The Washing Machines". In September 2013, Charlie Roe released her first original EP entitled ‘Pomegrenades Attack’ as a result of a long studio collaboration with Giuseppe Pugliese of the Mammut Project, presenting five original songs. Meanwhile, Charlie Roe featured on a track from David Aaronson, electronic music producer. The track is titled ‘Lost in Music’, released in early September 2013. She also participated in the 2014 edition of ‘The Voice of Switzerland’, performing in large venues and progressing to the semi-finals. With the band Charlie Roe & The Washing Machines she performed at many venues across Ticino and live sessions on radio and television in Ticino and Zurich, while creating new pieces of music and reaching an expanding audience.
Press picture