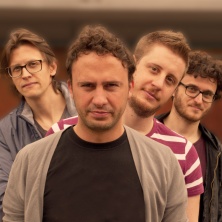 Band - "A live combo with a pure pop-rock soul!"

See all the offers of Roberto

We play our own original songs (pop-rock) plus a few covers. We get our inspiration from artists like the Rolling Stones, Beatles, Who, Red Hot Chili Peppers, U2, Coldplay, Oasis,...

We have a show of about 1h30 minutes (also divisible in 2 sets of 45 minutes with a little break in-between).

Acoustic, semi-acoustic or electric, depending from the occasion. We play with 3 guitars, 3-4 voices, a bass and drums/percussion up to complete lineup with keyboards.

Sound System: We have our own sound system up to 300 people

To perform, we need: - For small venues and events:
We just need enough space for 5 people and electric plug. We have our own sound equipment for events up to about 300 attendees.

We mix our own original songs with a few covers of artists like The Rolling Stones, Elvis Presley, Red Hot Chili Peppers, Steve Ray Vaughan and many more.
Biography
Founded in 2000 is composed by Roberto Pellegrini (vocals and guitar), Martino Piccioli (vocals, guitar and keyboards), Filippo (bass) and Stefano Marinucci (drums).
The band’s sound is between brit pop and classic rock.
In 2008, The Guinnass begin to collaborate with the producer Antonio Chindamo.
In 2014 the band releases the album called ‘Stereophonic’ (Auditoria Records). The single ‘Walk On To Be Free’, mixed by Marco Barusso (30 seconds to mars, Coldplay, Ramazzotti,….) reached the 2nd place on the Rete Tre Top 10 Chart (9 weeks).
On September 4, 2015 the single ‘Blackjack’ becomes the official theme track for the TV-format “Black Jack” broadcasted by the Swiss national radio ‘Rete 3’ and the Swiss national TV.
By the end of 2015 The Guinnass signed a publishing agreement with CDF Records.
In September 2016 the band had the pleasure to open for Francesco Gabbani, who would then win the Festival della canzone italiana in San Remo.
Press picture
4 Reviews