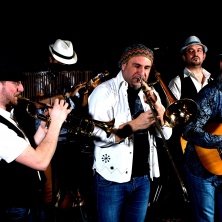 See all the offers of Futura

Sound System: We have our own sound system up to 1000 people

Lights system: We have our own

Biography
When it comes to Italian and Latin American music, Luca Artioli is a multi-talent. He composes film music, sings and plays classical guitar. He electrifies the audience with his impressive and rousing style. In Germany, his bands are based in the multi-cultural capital city, Berlin. His concerts are held in open-air venues and at indoor events in Germany and Europe-wide. Atrioli's music has a unique, unmistakable mediterranean flair. The German television stations ZDF, ARD and MDR have broadcast his music in conjunction with as number of films.
1 Reviews