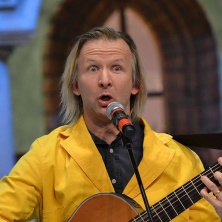 See all the offers of Luca

Luca Maciacchini presents, armed with voice, classical guitar, acoustic, electric and synthesizer, a musical anthology that ranges from Italian song "classic" and singer-songwriter to cabaret music in Milan (Gaber, Svampa, Jannacci, Valdi,The owls) to touch also international elements such as the American blues (Robert Johnson), ill rock - country and progressive rock (Creedence clearwatwer Revival, Pink Floyd), passing through the German song (Classics such as "Trin Trink Bruderlein Trink) to the French song (Brassens, Edith Piaf, Brél); possible forays into some tracks of Spanish guitar and Latin American music (El Vito, Asturias, Santana, Brazilian Classics), to get to the classics of Italian song '60s (Modugno, Morandi, Pettenati) and some classics of disco music (YMCA, Born to be alive) or soul (Everybody needs somebody to love): All this through a "theatricalized" formula that allows to act also in direct contact with the public also "physically" with extreme ductility and physical movement, without necessarily needing a fixed position but rather with the custom of "being" in the midst of the guests at the event, thus creating a real animation "participated".

Sound System: We have our own sound system up to 500 people