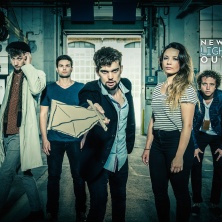 See all the offers of Marcel

Music critics agree: the multifarious music of the young Swiss band is reminiscent of the conjuring nature of Muse and the theatricality of Queen. But they aren’t the only ones NECKLESS succeed to convince with the novel sound of their album “Perfusion” (March 2012): the band has straightaway made it into the playlists of major Swiss radio stations, was to the finals of the largest Swiss music competition, was chosen from the major Swiss music radio as best talent of August 2012 and had been invited to star in several TV shows all across the country.
Press picture
Press Book