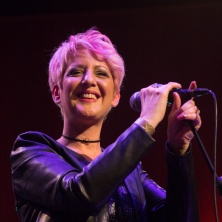 Band - Solo Singer or with Band (Duo, Trio, Quartet). Music for every kind of event.

See all the offers of Rossella

Rossella is a Singer that performs as a solo Artist or with a Band.

Ceremony. Choose the songs for your ceremony.

Party. Let’s get this party started!

You can find a little Biography, Photos, Pressbook and a Live-Video on .

Entertainment length: from 1 hour to 9 hours

Sound System: We have our own sound system

Lights system: We have our own

To perform, we need: The place where will perform the group has to be easily accessible by motor vehicles and has a reserved parking car.

A normal 220V for the exclusive use of the band.

Biography
Rossella is a swiss singer and songwriter.
Her background is R&B and soul and her models are Aretha Franklin, Whitney Houston, Mina and Annie Lennox.
From 2000 to 2007 she sang in different bands, she took part in some TV shows, some singing contests and a mini tour of the italian singer Alberto Fortis.
In 2005 she joined the group Accordion Project, a band proposing a jazz version of the French repertory.
In 2007 she released an EP containing two covers of Dalida which are continuously transmitted by the national networks.
Rossella will present her new CD containing songs composed entirely by her, and arranged by the great pianist and arranger Markelian Kapedani, guest of honor of "Waiting for Estival 2011".
From this album she decided to extract the single "Here I Am" to be presented in the selections of the Eurovision Song Contest of 2012 and the single "Pazzo di me", sold on digital stores.
Press picture
Press Book
4 Reviews