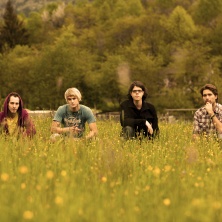 See all the offers of Sava

Sonic Wire's music reflects many kinds of musical genres ranging from heavy-rock (Life Goes On) to classic rock and even rock-pop (Twisted Minds). Beside 11 original tracks written by the band the album ends with a cover song that stands for a tribute to one among the several bands that gave great inspiration to the band: "Master Of Puppets" by Metallica.

To perform, we need: We would like a Backstage Area.
Drinks: Still Water, Beer, Sanbuca
We need 4x ShureSM58 + Backline, Monitors, ecc

In May 2013 Sonic Wire recorded and released their first album under the name of "A.N.T.".

Later on they took part in a talent show ( that was broadcast on the main Swiss-Italian TV channel (RSILA1). In June 2013 the band won the first prize at the Garage Music Live Contest in Castione.
Press picture