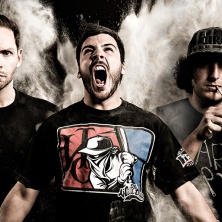 See all the offers of Davide

August 1, 2003 the Steeld was born. Steeld started out small by giving concerts locally and singing New Metal cover songs. Soon they were asked to be the supporting act for the Lovebugs (CH) in Pontresina and Zoo Army (D) in Uster.

Biography
In February 2013 Steeld went on their first tour outside of Europe. The "Welcome to Reality" tour featuring concerts in St.Petersburg, Moscow, Ryazan and Smolensk has been a great success and the russian fans were really exited to see Steeld in action for the first time.

The year has found a great end with a support gig for Papa Roachs "Silence is the Enemy" Tour at the Kesselhaus in Munich on November 18th 2013 and the release of the Single "Places" which has been written, recorded, mixed and produced entirely by Steeld.

There will be lots of great music to come for 2014 since Steeld is planning on releasing some more singles from their debut "Welcome to Reality" and a second Album.